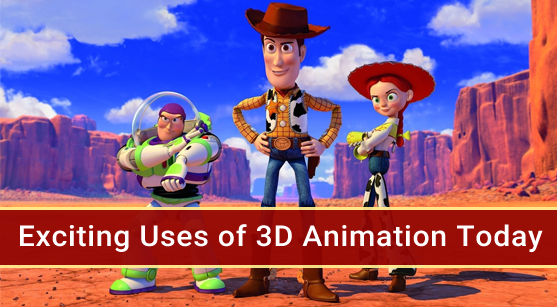 The use of animation has burst into the scene in recent times. People are finding more and more uses of animation in various fields.

The movie, Toy Story was a grand success. Though the earlier movie Jurassic Park also used animation, it was basically used only for conceptualizing dinosaurs and the rest of the movie was for real. Toy Story set the benchmark for movies made entirely from computers using 3D animation.

Since then, 3D animation has been used by various industries for different applications. It is not only a valuable science that can be applied to various fields, but also an exciting choice of career like Information Technology.

A few of industries making use of 3D animation development are:

For example, take interior designing. Using animation software, interior designers can visualize rooms on their computer. They can judge how a particular design will work for a room and how it can be conceptualized. Like this, animation is used by architects for buildings they design and ship makers can design ships also. Many physical product manufacturers like bicycle designers, car makers, computer chip designers, all can utilize 3D animation.

In medicine, 3D animation can be used for training and simulation. A novice surgeon can practice surgery skills.  Conceptual information can also be communicated effectively. For instance, watching a bodily process is more effective for learning rather than reading about it.

Just like in film making 3D animation can be used in stage shows. Many artistes are pushing the boundaries for use of animation in stage shows. For example, in 2011, Amon Tobin, an electronic musician created an amazing show wherein computer generated images were projected on an object in real space, located on the stage. This very impressive show became popular world over.

Animation is useful in all fields today. Its value lies in the fact that it is a widely used technology which can be utilized for producing all kinds of images: pragmatic, fantastic, realistic, innovative etc. The only boundary is the imagination of the animators. 3D animation has a great future in diverse fields.